Artie and Belinda didn’t set out to make the barefoot, spaghetti-strapped strumpets of Grand Caillou contemplate their fire-burning afterlives, but that’s exactly what happened when their business implemented a puritanical dress code.

Belinda, known for her loud, floral-print blouses that would have gotten her stoned for harlotry in the Old Testament, regularly heaps morality judgments upon the bare-shouldered sinners who wander their depraved souls into her temple of chaste commerce. Sea-Go Seafood might serve the same shellfish that the bible forbids, but they won’t accept the filthy lucre of halter-top hussies who want to dine on it.

Artie, known for his endless array of dazzling plaid button downs, is more visual than verbal when voicing his distaste for the transgressing wrongdoers that fracture his clothing commandments. Morality has no nuance or context when it comes to fashion. There is no gray area inside of Sea-Go Seafood. It’s all black and white. Artie eloquently expresses this philosophy via his footwear, as his jet-black socks tastefully contrast with the brilliant white of his sneakers. 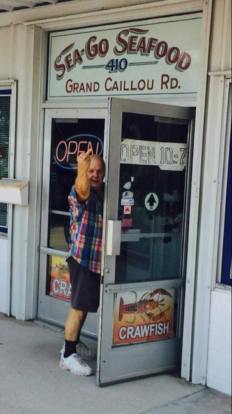 (Artie, pictured above, majestically dressed as he ushers another reprobate woman from his establishment.)

Many people defend Sea-Go’s right to run their business as they see fit, especially since the clothing commandments are clearly posted. But the problem is, 71% of east side residents are illiterate. Many unwitting patrons stroll into the store expecting a completely normal experience but instead receive the news that their cleavage makes them unfit to purchase seafood…or enter the kingdom of heaven.

This seems like a terrible business model. A study conducted by The Push Pole found that 84% of people who purchase crawfish were either showing shoulder, toe, or belly button during the time of the transaction. This policy eliminates many customers from patronizing Sea-Go. It would be the equivalent of gas stations only selling Mad Dog 20/20 to people with all of their teeth.