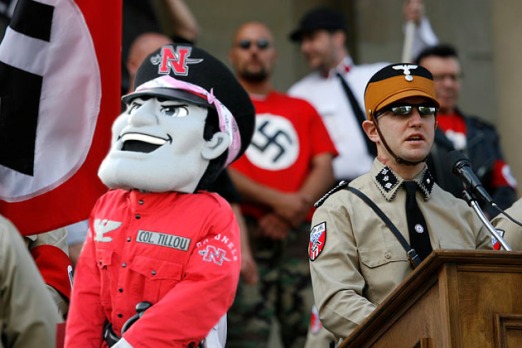 Many people’s longtime suspicions were confirmed yesterday when Colonel Tillou was spotted attending a Nazi rally.

For years, students of Nicholls State University have been saying that Colonel Tillou looks like a Nazi, but no one knew if he harbored any fascist leanings.

All that changed when he grabbed the microphone and yelled,

I’m a jackbooted, storm-trooping poly blended ornament of authoritarianism, and I’m not going to hide it anymore! If you don’t like it, you’re gonna have to pry the swastika from my soft, gray mittens!

Critics argue that Colonial Tillou can’t help what he is. As a mascot, he’s cursed to express himself within the parameters of his appearance. Jake Vermillion, who has been practicing mascot psychiatry for twenty years, stated, “If your mascot looks like a lion, it’s probably going to inspire bravery and maybe even maul a hiker. But if your mascot looks like a Nazi, it’s probably going to end up on trial for war crimes. That’s just science.”

The school has declined to punish the colonel. They realize that they created him (by paying some guy in Ohio twenty grand to draw a sword brandishing tyrant) and now they are kind of just stuck with him.