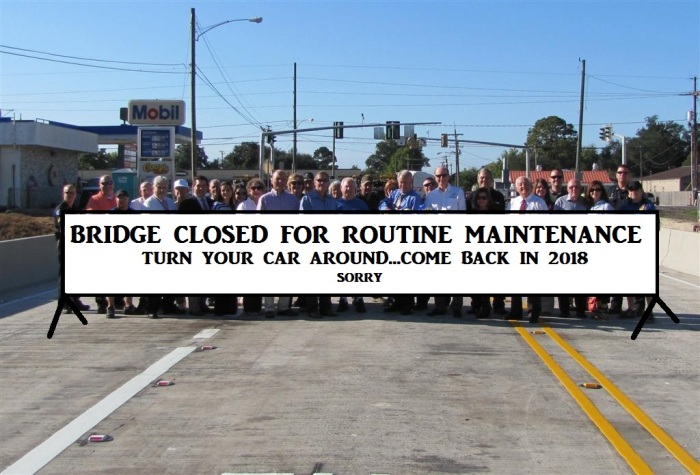 City officials in Thibodaux have issued a notice that the Tiger Drive bridge will be closed for another few years. The entirety of city hall, unable to contain their glee with continuously closing this major artery for no apparent reason, gathered together to pose behind a sign informing the public of this major inconvenience. Project Engineer Otis Anderson remarked:

“We used the wrong shade of yellow on the lines. We were shooting for an Amber Maize mix, but instead we got sort of a Goldenrod Mustard, so now we have to do it all over again. The new paint is coming in from a small island in the South Atlantic by boat. It should be here in a few months, and then we can start accepting bids on who gets the contract to repaint the lines. After bids are accepted and the winning company is vetted, we’ll go ahead and set a tentative starting date. We are shooting for sometime in 2018.”

Mr. Anderson went on to add that because of rain out days and hazardous working conditions, a more realistic completion date would probably be around March of 2019.